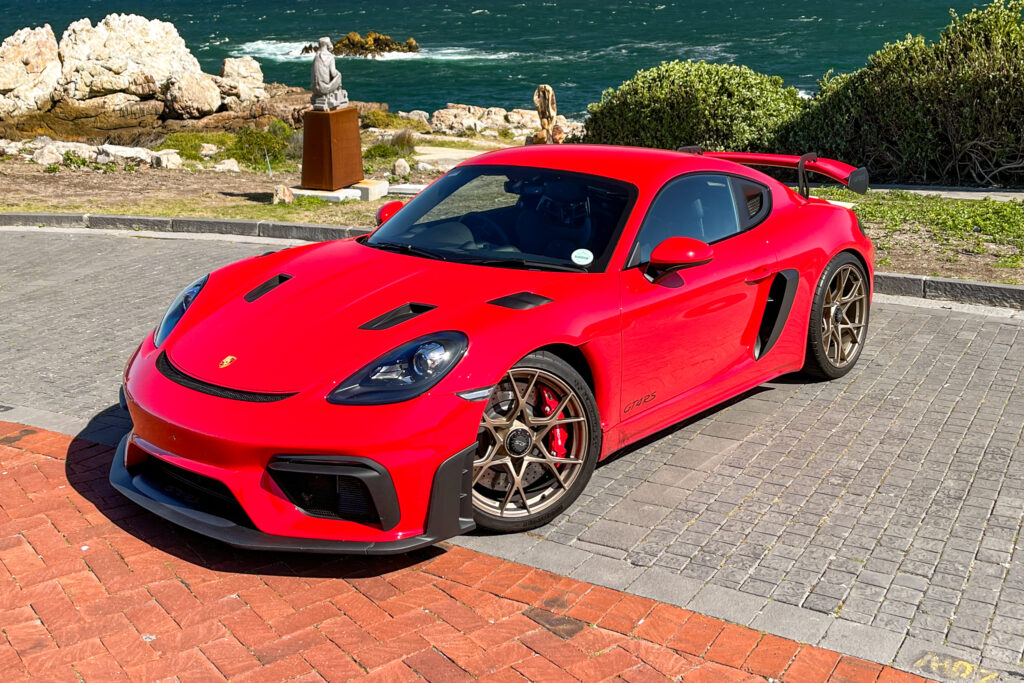 For a very long time, it was assumed that Porsche would never unshackle the Cayman with a GT4 RS variant purely so it would not step on the toes of the larger, more expensive 911 range. It is considerably smaller and lighter and thanks to the mid-engine layout, doesn’t have to fight the laws of physics like the bigger brother. Luckily for us, they decided to create the RennSport variant and the result as expected is utterly mind-blowing.

It is absolutely gorgeous to look at and that sizeable swan-neck rear wing grabs your attention immediately. This wing design mimics that of the 992 911 GT3 and its presence alone is enough to indicate the intentions of the GT4 RS. You also get NACA air intakes on the bonnet to keep your brakes cool without disrupting drag, a four-way adjustable front diffuser increases front downforce, underbody deflectors improve rear downforce and slatted wheel arches prevent lift on the front axle. All in all, the GT4 RS delivers 25% more downforce over the ‘regular’ GT4.

It is 30mm lower than the GT4, the front and rear track are 6mm and 8mm wider respectively, and the rear axle camber has been increased by a quarter of a degree. You also get Porsche Active Suspension Management (PASM) chassis and Porsche Torque Vectoring (PTV) as standard which works in harmony with the RS-specific spring rates.

Not much changes inside the cabin and creature comforts are minimal. You get full carbon-fibre race bucket seats as standard, a Race-Tex-trimmed steering wheel with a yellow 12 o’clock marker, door pull loops, a touchscreen infotainment system with Apple CarPlay and Porsche Connect, as well as a very neat manual-like GT-specific gear lever. No distracting controls on the steering wheel here just some neat shift paddles that sit perfectly under your fingertips.

Hop inside and right behind the seats sits the 4.0 litre flat-six engine that redlines at a besieging 9,000 rpm, with all 493 hp (368 kW) peaking at 8,400 rpm and 450 Nm at 6,750 rpm. Thanks to individual throttle bodies, this is one of the most responsive cars we have ever driven with more than enough power on tap and raring to go and have some fun at any second.

So is the hype about the noise all worth it? Without an inch of a doubt. Sure it is loud outside the car when it screams to 9,000 rpm but inside the GT4 RS, you get bathed in a mechanical cacophony. You hear absolutely everything from the suck of the magical air intake to the exact moment when the VarioCam valves lift past certain rev ranges. We have never driven a car that draws you in with so many different noises but it is enough to completely isolate you from the outside world. You hear absolutely nothing else and it is utterly addictive.

We absolutely adore the lightning operation of Porsche’s double-clutch gearboxes, but sometimes, the ratios have been a little tall to enjoy in the real world. In this application, that is not the case as you can bang through shifts like you are on a motorbike. The engine rips to the redline like it has the world’s lightest flywheel and that next gear is grabbed so fast, that it is hard to process. It is what we like to refer to as barely controlled mania that reaches a vibrant crescendo before every shift.

Handling as expected is majestic, to say the least, and the steering is beautifully direct and gives perfect feedback to tell you exactly what is happening. Everything feels so balanced that you feel like a part of the car and in turn gives you so much confidence to get closer and closer to the limit.

It took three full Cayman life cycles for Porsche finally deliver this one and if recent reports are accurate, this is as hardcore as the Cayman will ever get. The folks at the GT division pulled out all the stops for what is essentially a swansong for mid-engined Porsches because what comes next will probably not be as engaging and will definitely not deafen you (in a good way).

While this ‘baby-RS’ production is not coming to an end as you read this, the replacement is coming and it is expected to be fully electric. We cannot think of a better time for Porsche to shove their wildest naturally aspirated engine into this platform.

We have been fortunate to have driven some of the best cars in the world but for now, Porsche still remains the maker of some of the best driver’s cars the world has ever seen. The Cayman GT4 RS is Porsche GT in its pinnacle form; a way of telling the world that it’s bowing out of the internal combustion arena in the grandest of all measures.

The base price sits at R2,556,000 and if you are lucky enough to be adding one of these to your collections you must hold on to it tightly.

It is truly a special creation full of noise, outright speed and downright fun. We are aware that it can lap the Nürburgring in just 7:09, but for the first time in an RS-badged Porsche, nobody should really care. The GT4 RS is a celebration of more than a mere lap time and instead offers a thrillingly different take on the special ingredients that made us drool over 911s for years

In short, we are rather confident that it will go down as one of Porsche’s greatest ever RS models.