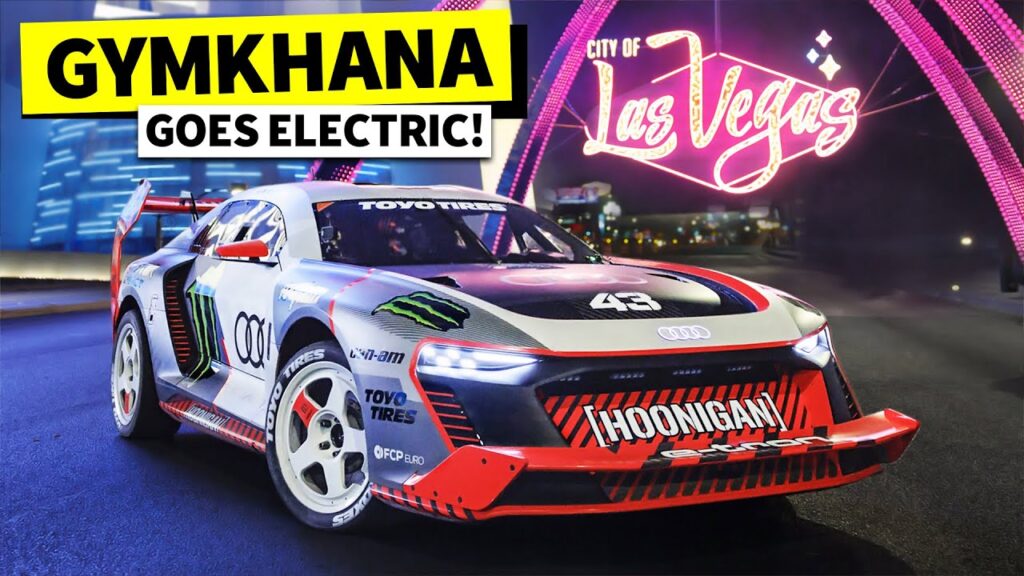 For the first time ever, Ken Block and the famous Gymkhana series goes electric. Ladies and gents, welcome to Electrickhana.

Ken Block has created ten wildly successful Gymkhana films with over a billion views on YouTube where he flexes his amazing driving skills behind the wheel of rather serious machines. All of these machines until now run on fossil fuels.

Ken Block and Hoonigan are taking the Audi S1 Hoonitron to the high-stakes playground of Las Vegas for their all-new video.

The video description says it runs an 800-volt system and while there is no mention of the power it does not really matter.

The Audi S1 Hoonitron has two electric motors, all-wheel drive, power galore, a carbon fiber chassis, and fully complies with the safety standards of the FIA, motorsport’s governing body. Audi Sport developed it as a one-of-a-kind car exclusively for Ken Block. Its body shell, for which Audi Design led by Marc Lichte is responsible, immediately evokes memories of the legendary Audi Sport quattro S1 with which the four rings charged to the top in the famous Pikes Peak hill-climb race. Ken Block and his team engaged in close exchange with the Audi departments during the development of the vehicle.

“With the S1 Hoonitron we broke entirely new ground at Audi,” says Oliver Hoffmann, Member of the Board for Technical Development at AUDI AG. “Developing a fully electric prototype for the unique requirements of our partner Ken Block was a big and exciting challenge to which the whole team rose with flying colors. It is great to see how ‘Vorsprung durch Technik’ is presented in an all-new environment.”

Audi
Share. Facebook Email Twitter LinkedIn WhatsApp Telegram
Previous ArticleWhat Can The Out-of-Service Catalytic Converter Be Replaced With?
Next Article Volkswagen R Performance Brand To Be EV Only by 2030