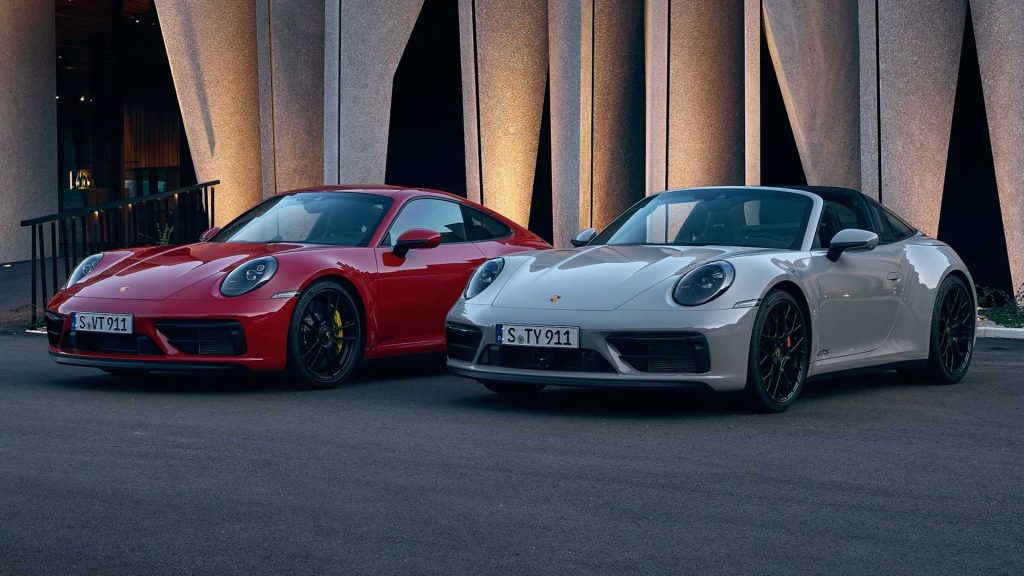 Porsche 911 has a bunch of variants for each generation really giving customers endless options to choose from in terms of budget, performance and practicality.

The 911 GTS has become quite the sweet spot over the last 12 years since it was launched and here we have the all-new 992-generation.

It will sit between the Carrera S and Turbo models, pairing a bit more power than the S with a handful of other performance upgrades. At the heart of the GTS trim is Porsche’s twin-turbocharged 3.0-litre flat-six engine that produces 473 hp (353 kW) and 569 Nm (420 lb-ft) of torque. That’s 30 hp (22 kW) more than the Carrera S and 23 hp (17 kW) more than the previous 911 GTS. The engine pairs with either the eight-speed dual-clutch (PDK) automatic or the seven-speed manual. Porsche shortened the manual shifter by 10 millimetres (0.39 inches) for quicker shifts.

As usually, the Porsche 911 GTS will be offered in both rear and all-wheel-drive configurations in Coupé and Cabriolet variants.

According to Porsche, the Carrera 4 GTS is able to sprint to 100 km/h in 3.3 seconds when equipped with the PDK transmission.

The engineers also tweaked the suspension resulting in 10 mm ride height drop and upgraded the brakes to the high-performance system found on the 911 Turbo.

If you wish, you can tick the Lightweight package which drops 25 kg thanks to the use of lighter carbon-fibre bucket seats, lightweight glass, and a lightweight battery. The rear seats are also removed.

Cosmetically it will differ from other 911 models with its black or darkened exterior details, effectively wearing the SportDesign package. Visual upgrades include the Satin Black lip spoiler, centre-lock alloy wheels, engine cover grille, and the GTS script on the doors and rear of the car. The Targa 4 GTS receives a darkened Targa bar and lettering. The GTS models also get darkened light surrounds, standard LED headlights with Porsche Dynamic Light System Plus, and darkened rear lights.

Inside you will find the GT sport steering wheel, the Sport Chrono package, the Porsche Track Precision app and Sports Seats Plus with four-way adjustable support as standard. as standard. The new 911 GTS also comes with the latest Porsche Communication Management Infotainment system which now includes Android Auto.

Pricing for the new Porsche 911 GTS range in South Africa is as follows which include a 3 year/100 000km Driveplan.

The new 911 GTS models are available for sale now, with the first units expected to arrive in the fourth quarter of 2021.