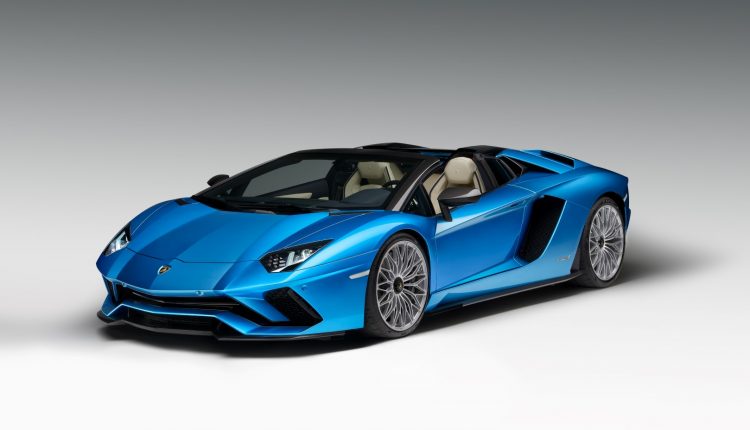 It was only a matter of time until we saw the drop-top version of the mighty V12 Aventador S and it looks absolutely mesmerizing in this Ad Personam Color Blu Aegir.

CEO, Stefano Domenicalli says “The Aventador S Roadster offers the thrill of open air driving without compromising on driving dynamics or the occupants’ comfort, and adds a further luxurious dimension through the personalization options available.”

At the back the car sports distinctively different lines to the coupé, giving the roadster its own aerodynamic character. Like the regular Aventador Roadster, there is an engine bridge running from the back window to the rear in a mix of body colour and matte black painted carbon fiber engine bonnet blades. If you wish, you can spec the transparent option to show off the V12 engine within.

The roof is removable and weighs just 6kg thanks to the magic that is carbon fibre. As standard it is finished in matte black carbon fibre but optional specifications including high gloss black, shiny visible carbon , and further Ad Personam possibilities. Lamborghini claim that it features “an easy fastening system allows the roof panels to be quickly removed and stored in the front trunk.”

Want to hear that V12 howl without taking the roof off? You can thanks to an electronic rear window and if you have the roof off, the window minimizes cabin noise and airflow.

The same technology from the Coupe is transferred over to the Roadster version which means you get four-wheel drive, new active suspension, new four-wheel steering system, and the new EGO driving mode.

“The Aventador S Roadster is launched in the Ad Personam Color Blu Aegir, inspired by the peaceful turquoise ocean hiding an indomitable force beneath: sophisticated yet powerful, with extensive use of carbon fiber.

How Does ‘Aerodynamic Supercharging’ Give The Lamborghini SCV12 More…