Pros and Cons of a Car Battery Charger vs. Jump Starting a Battery 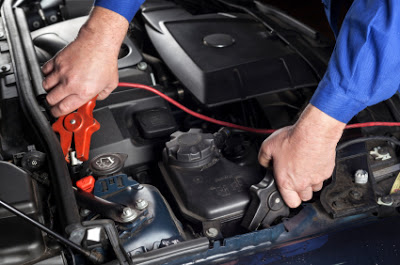 Nobody likes to end up stranded because of a flat car battery. Chances are though we’ve all been there before. You go to turn your ignition and nothing happens – maybe you hear a few clicks? If your battery doesn’t have enough power to start an engine it could be a sure sign of another dead battery. For those that are prepared, you may have a battery charger in the boot, jumper leads or a jump starter to get going again, but what option is best for an emergency situation?
Having at least one of these options on hand for flat car battery crisis should be a priority for every driver. Both a battery charger and a jump starter can help you get back on the road again, but it’s important to understand how each works before you decide what’s best for your needs.

Car Battery Chargers
A flat battery can be easily avoided if you have a battery charger. These chargers work by converting alternating currents into direct currents and should be purchased based on the type of car battery it’s to be used on. Car battery chargers can be relatively inexpensive, but is a worthwhile accessory to have in the car for emergencies. Before purchasing a charger, you need to weigh up the size and type of the battery. A basic car battery charger will usually charge at around 2 amps which means it’ll need 24 hours to deliver the 48 amps needed to fully charge a flat 48-amp hour battery.
Most car battery chargers are designed to diagnose, recover, charge and maintain most standard batteries. Some batteries can offer different charge rates with higher charge outputs that’ll revive a flat battery quicker. You’ll need to consider the loads imposed on the battery, like headlights and electric windows too.

Car Battery Charger Pros
Car battery chargers are a popular option simply because they’re convenient. As the range of chargers constantly evolve, there’s a design that’s reliable, easy to use and durable enough for any battery or situation. One of the biggest advantages of chargers is their better performance – especially when it comes to rechargeable car batteries because the ‘refresh’ mode ensures you get the optimum performance and life.
Amps and wattage are an essential factor to consider when purchasing a charger (the higher the amps the longer the charger lasts and the quicker the charge is). If you want to go for an eco-friendly alternative, solar battery chargers work on using the sun to charge the car battery and sits on the car’s dashboard.
Battery chargers are great for saving time and money because of their practicality. And it only takes one flat car battery and a charger to save you from being stranded too long to realise the value of them.

Car Battery Charger Cons
On the flip side, car battery chargers are only great for emergencies if they’re charged! If you haven’t charged the car battery charger since it was last used and its tucked away in the back of your boot collecting dust, it’s not going to be any help to you come dead battery time. Car battery chargers are only convenient if they have been properly charged prior to use.
Battery chargers can also come with a larger price tag attached than jump starters. Usually it’s only when you’re needing a higher output, as this results in a bigger transformer increasing the cost significantly. If you’re only after a car battery charger with a small output needed, it can still be fairly cost-effective. The biggest downfall for most drivers with car battery chargers is its inability to charge at a quick pace. Whilst higher amps will charge quicker, they may still take a while to charge overall (can be up to 12 hours to get a full charge).

Jump Starting a Battery
Jump starters a basically booster for batteries. They are designed to ‘jump start’ the car, without actually recharging the car battery itself. Unlike a battery charger, jump starters will give your car batter an instant surge of charge and power. This can give about 10-20 minutes of power which should be enough to either get you to a local mechanic or home.
Pros of Jump Starting Your Battery

Jump starting a car will get you back on the road super quickly – and that’s where either jump starter packs or jumper leads can come in handy. One of the major advantages of jump starting your car battery over a battery charger is the amount of power produced. Battery jumpers a high powered output (ranging from 700 – 3,000 amps) which makes car batteries usable in seconds as opposed to chargers which take much longer).
Because jump starters are smaller than car battery chargers, they’re better for car storage and portability. Their size and lack of need for a separate transformer make them more practical than battery chargers. Portable jump starters don’t have lithium batteries like chargers (which makes them more compact) and they come with cranking amps to ensure the process of getting back on the road is a quick and easy one.

Cons of Jump Starting Your Battery
Depending on what jump starter pack you purchase, some may need to be charged overnight. Whilst they do tend to be more portable than battery chargers, the extent of this portability depends on the weight of the batteries inside. Most will be light enough to be portable but for heavier jump starters, they may not be light enough to lift easy.
Jump starters will get your car on the road much quicker and easier than battery chargers, but you’ll need to drive around and keep the engine running for at least 30 minutes afterwards. This allows enough time for the alternator to charge the battery. If you’re still having problems with the battery after this, chances are the problem lies with the car’s alternator.

Author Bio
This article is written by Jayde Ferguson, who writes for Autospark – Perth’s leading auto electricians with car battery replacement options. You can catch Jayde on Google+ to discuss this piece.