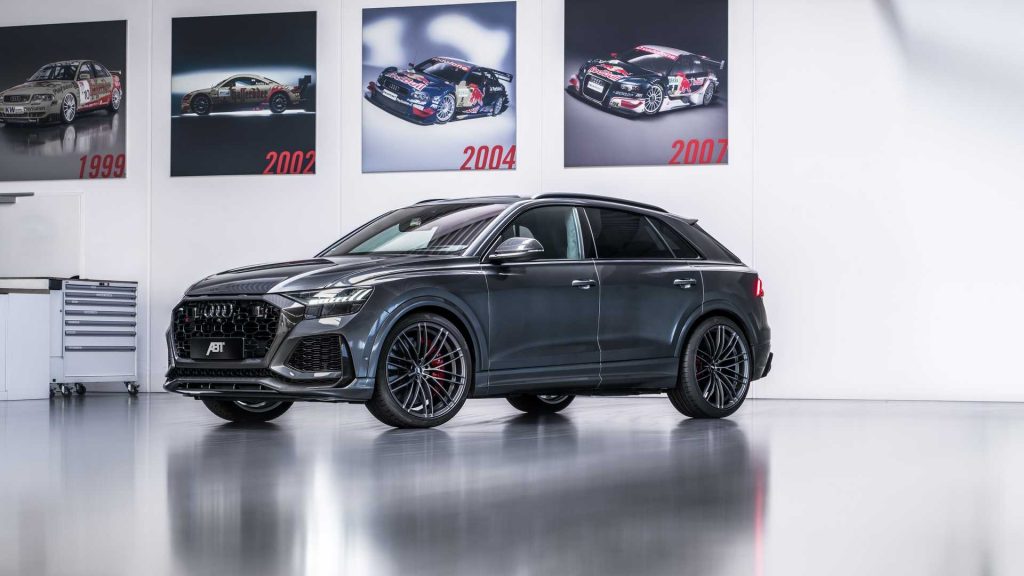 Not so long ago, Audi took the wraps off its first-ever RS Q8 featuring the same 4.0-litre twin-turbo V8 that’s powering its Italian cousin, the Lamborghini Urus, albeit with a bit less power. Now as expected, German tuner ABT saw fit to do something about this.

Rolling out of the factory, the Audi RS Q8 churns out 592 hp (441 kW) and 800 Nm. Thanks to these healthy numbers, it takes the SUV just 3.8 seconds to hit 100 km/h from rest before reaching its electronically limited top speed of 250 km/h. While the performance specs sound impressive, the Lamborghini Urus does the 0-100 km/h sprint 0.2 seconds quicker and does 305 km/h flat out. Yes, you can opt for Audi’s Dynamic Package which does away with the electronic limiter to achieve the same top speed as the Lamborghini, but ABT reckons it has a better plan.

The German tuner has introduced a software upgrade that squeezes out a whopping 690 hp (515 kW) and 880 Nm from the turbocharged V8. Although ABT is keeping the performance specs concealed, this tune has given the Audi RS Q8 49 more ponies (37 kW) while twist force is up by 30 Nm compared to the Lamborghini Urus.

Unsurprisingly, the performance upgrade is also available for the RS6 Avant and RS7 Sportback which are also powered by the same engine. And to complete the puzzle, ABT has also massaged the 2.9-litre twin-turbo V6 in the RS4 Avant from 444 hp (331 kW) and 600 Nm to deliver a vigorous 503 hp and 660 Nm.

Lastly, apart from the engine upgrades, ABT still has a treat in store for the Audi RS line-up. The tuner plans to spec up the RS4, RS6, RS7 and RS Q8 with some aero packages as well as a number of interior options while suspension upgrades are also in the works.