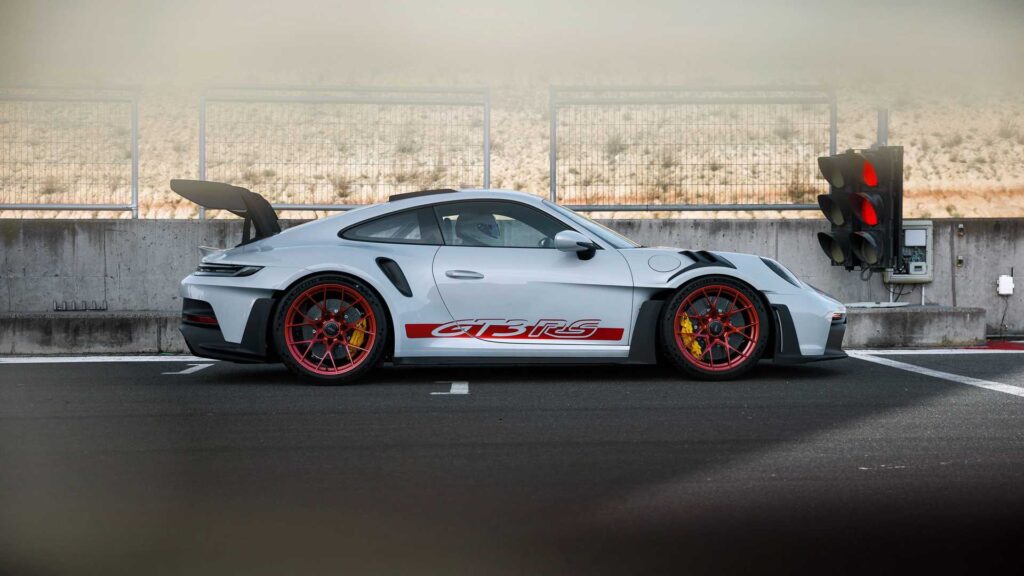 Downforce is the name of the game and it starts up front with that centrally mounted radiator. This is the first time, outside of racing cars such as the 911 GT3 R, that the radiator has sat in the front where the boot would normally be. Moving the radiator to the nose allows the space at the sides to be filled with moveable aerodynamic aids.

What’s really interesting, is the level of adjustment available at the driver’s fingertips. The 992 GT3 RS comes with the usual three driving modes – Normal, Sport and Track – but in Track mode, the driver can now tune the basic settings individually using rotary switches on the steering wheel. You use these to tweak the rebound and compression damping across the front and rear axles, as well as the differential settings. All the settings are shown in the instrument cluster, which has the same gear change indicators and track mode as the GT3.

Powering the new 3 RS is their naturally aspirated 4.0-litre flat-six engine tuned to crank out 518 hp (386 kilowatts). This power hike was thanks to new camshafts with modified cam profiles, featuring a motorsport-derived single-throttle intake system. Power is sent to the rear via its seven-speed PDK gearbox.

Porsche managed to keep the weight down to 1,450 kg thanks to the extensive use of Carbon Fiber Reinforced Plastic (CFRP) which was used for the doors, front wings, and bucket seats.

If you want to be more hardcore, you can tick the Clubsport package at no extra charge. This adds a steel rollover bar, a six-point seatbelt, and a hand-held fire extinguisher. The car will also be available with the Weissach pack, but it’ll cost extra as it adds a lot of goodies (expect around R500k). It includes a carbon-weave finish on several exterior components and more CFRP parts like the front and rear anti-roll bars, the rear axle sheer panel, and the roll bar. Those who get the Weissach pack can also upgrade to the optional magnesium forged wheels to save even more weight.